It has well documented that Leisha has not been a big fan of single track on her bike.  For those that don't know single track is typically a path through the woods just wide enough for one bike (sometimes as narrow as a couple inches for the tire only) and depending on the difficulty can include steep uphills or downhills, drop offs, logs, jumps or banked corners.  Back in late spring we decided we need to ride more single track to become more comfortable.  I must say Leisha has improved a great deal and looks way more comfortable riding.

When we decided to ride more I was thinking that our kids may like it.  I took Trey (8) by himself first. 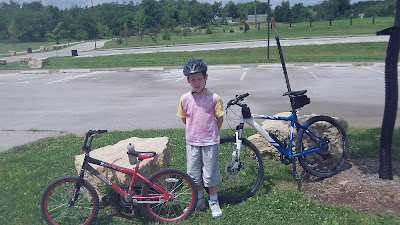 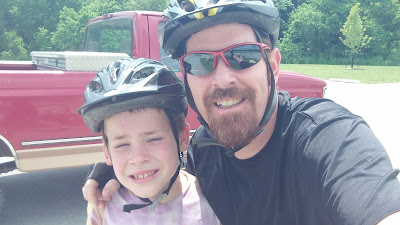 He loved it...even though he is not good at smiling for the pictures.  It was very sunny and he couldn't get his eyes to open.﻿  When Lexi (10) heard how much fun her brother had she wanted to go the next day and try out her mountain bike. 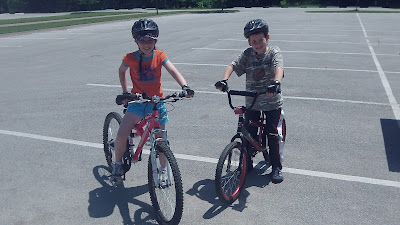 She was a little more careful but she picked it up quickly and also had a blast.  We had a great summer riding trails.  We went probably 15-20 times over the last four months.
The youngest, Leah (4), had been hearing about all the fun we had been having at Sunderbruch and of course she wanted to go. 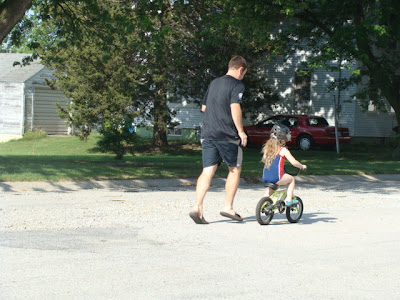 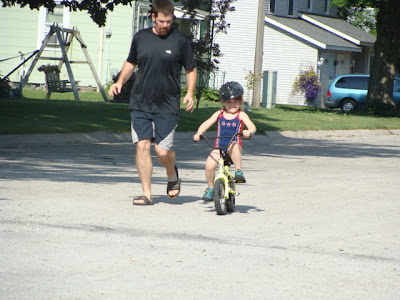 The first day we took off the training wheels she had it!  It was June 6th and she has been riding all over town every since.  So I was thinking how I could get her to go with us and not scare her to death so that she won't want to try again.  I had an idea.  Sunderbruch is a great park, there is a asphalt path through the middle of it and all the miles of trails go off of either side, but always come back out on the same path at some point.  I thought that Leisha, Lexi, and Trey could ride the single track while Leah rides and I run on the asphalt. 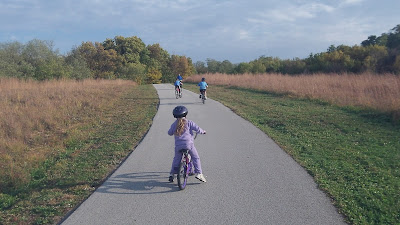 Over the crest of the hill about 100 yards the other 3 turned off the path and took off on the single track.  When Leah and I caught up to them she says, "I can ride this way too."  I said something to the effect that it was difficult and we should just stay on the path.  That sealed it, she was going down the single track.  I gave her some instruction and we were off.

She did great.  I took two short videos but once again I can't figure out how to get them from the computer to internet land so some still pictures will have to to. 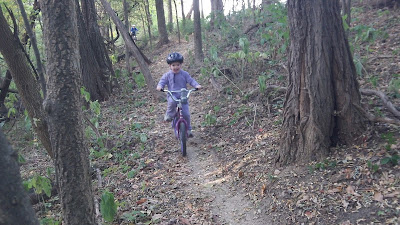 And the rest of the family...
﻿
﻿﻿﻿
﻿﻿We really had a blast!  I think I had more fun running the trails than riding.  It may have been just watching the family having so much fun. 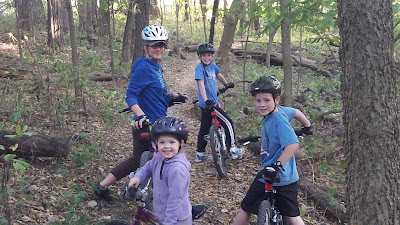 ﻿We finished up that first loop of about 1.5 miles.  Leah needed a break so I ran with Trey and Lexi while Leah and Leisha rode the path and sat on a bench.  When we met back up I was surprised to hear that Leah wanted to go on the single track one more time.  I was thinking that this could be bad.  Usually one more time means someone is going to get hurt.  Especially the tired ones.  But against my gut instinct I said sure.

We did the smallest section that we could.  We made it with no problems.  Back to the bike path and down the big hill to the truck.  Lexi took an extra section of trail down to the parking lot and the rest of us stayed on the path.  At the bottom, Trey and Leah rode ahead to the truck while Leisha and I waited for Lexi about 2 minutes.  When I rounded the last corner running at the bottom of the hill I saw Leisha picking Leah up off the concrete, and heard screaming.  So...lets get this straight, Leah rode all of that single track and big hills and she falls 50 feet from the truck in the parking lot. 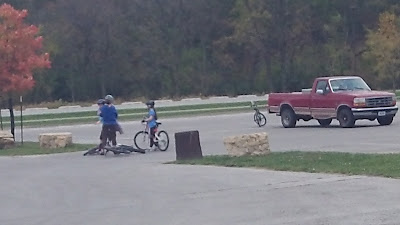 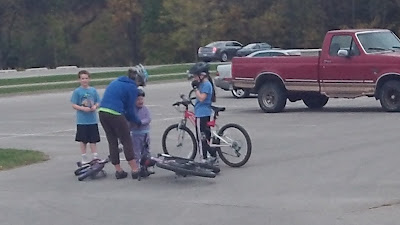 When I finally caught up I said, "what happened?"  Trey said she took her hand off her handlebars.  "Why did you do that Leah?"
"I wanted to be like Trey."

Leah had a couple minor falls but did great!  We all rode/ran almost 3.5 miles and no major injuries.